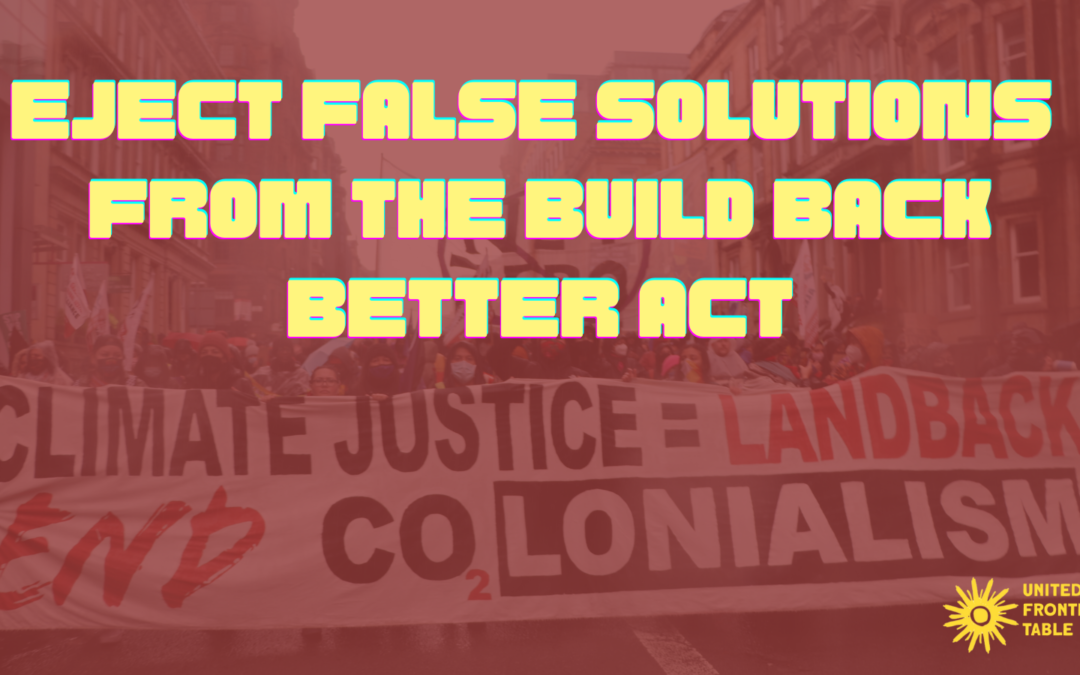 The letter calls on Senators to remove all fossil fuel subsidies that support polluting coal, gas, and oil production. The letter also calls for the removal of tax credits and funding from the Build Back Better Act that would subsidize nuclear power, biofuels and biomass energy, hydrogen power, waste-to-energy production, and carbon capture and storage technology that incentivizes continued coal, gas, and oil production.

Letter signers called this collection of energy technologies “false solutions,” citing the White House Environmental Justice Advisory Council Recommendations Report on President Biden’s Justice40 Initiative, which demands all Federal investments to “do no harm,” and names these dirty energy sources in its list of projects that do not benefit communities. These technologies harm communities on the frontlines of energy materials extraction, production, pollution, and the climate crisis.

“President Biden and Members of Congress are touting the Build Back Better Act as a potentially historic investment to confront the climate crisis. While there are substantial investments that could support progress, the bill also includes handouts to fossil fuels and dirty energy technologies that harm already overburdened and historically harmed communities. Congress and the President should not throw frontline communities living with fossil fuel extraction and climate crisis under the bus to get this bill across the finish line.” said Bineshi Albert, Co-Executive Director of the Climate Justice Alliance.

“These incentives in Build Back Better are give-aways to the polluting industries that got us into this mess. Congress Members, Senators, and the President are negotiating with people’s lives. Investing in dirty energy would lock in years of continued emissions and climate delay that harms Indigenous, Black, and People of Color communities the most. A Build Back Better Act with billions of dollars for industries that want to keep polluting cannot reasonably be called a climate bill. Senators must remove dirty energy from this bill and direct funds to support a just transition to a renewable energy economy.” said Adrien Salazar, Policy Director of Grassroots Global Justice Alliance.

An addendum to the letter outlines how subsidies to each of these energy sources produces environmental health and justice risks that disproportionately affect Indigenous nations and communities and Black and People of Color communities. For example biomass burning and biofuels are net contributors to carbon emissions for at least 50 years, municipal waste incineration produces local pollutants that produce hazardous health impacts, and carbon capture storage or utilization technology prolong fossil fuels extraction and production. The letter calls for the removal of the 45Q tax credit  that would not only subsidize coal and gas production, but that incentivizes enhanced oil recovery, a production method that extends the life of oil fields.

The letter calls on Senators to act to remove these dirty energy investments while the bill is under review in that chamber. Signers state: “The Build Back Better Act will not be a climate justice bill with these investments. We cannot applaud this bill on one hand and accept funding for false solutions that will harm frontline communities with the other. As the Build Back Better Act moves to the Senate we urge you to remove expenditures that will harm communities.  For the final version of this bill to actually be historic, it must prioritize directly impacted communities and do no harm.”

Read the full text of the letter, addenda, and a list of signatories here.

For organizations and individuals requesting to sign-on visit unitedfrontlinetable.org/bbbafalsesolutions.