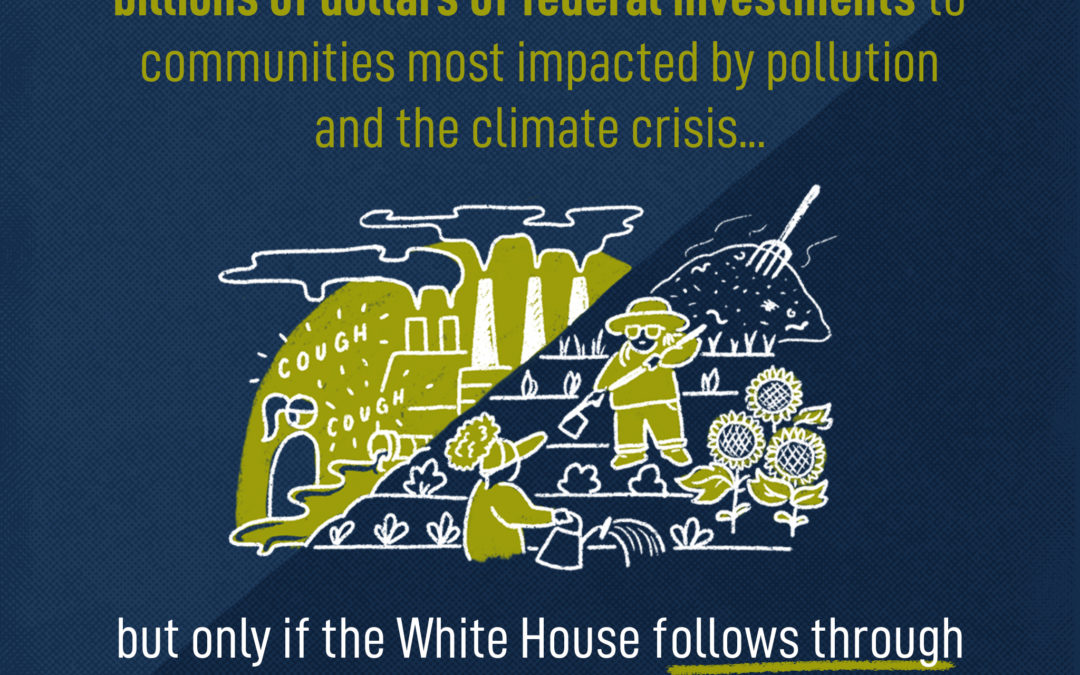 Last year, as part of Executive Order 14008, President Biden announced his Justice40 Initiative  which mandates that 40% of the benefits of all federal climate investments go to disadvantaged communities on the frontlines of the climate crisis. The Justice40 Initiative aims to take a whole-of-government approach to address historic inequities and advance environmental justice across agencies and offices. The White House plans to release its final Justice 40 guidance some time this year.

Members of the Green New Deal Network and the United Frontline Table urge the White House to strengthen its Justice40 Initiative by:

The recent passage of the Inflation Reduction Act will channel hundreds of billions of dollars in climate spending but also has incentives for dirty energy and technology that prolongs the life of fossil fuel infrastructure. For this reason, it is now more imperative to direct investments that mitigate and prevent future harms to frontline communities.

We applaud Congressmembers for standing with communities on the frontlines of pollution and the climate crisis in calling the Biden administration to commit to implementing a Justice40 Initiative that gives funds directly to frontline communities, creates jobs, centers justice, and gets it all done quickly.

“We thank the Administration for acknowledging, through the Justice40 Initiative, the long suffering of communities throughout the country that suffer from historical environmental injustices,” said Reverend Michael Malcolm, People’s Justice Council Alabama. “However, we are concerned with the lack of investment that should accompany the acknowledgement. Leaving it up to states to shape these investments means that we are following the same paths that have historically debilitated our upward mobility in the South. The Administration should do everything in its power to make sure states and communities on the ground get resources they need, and that means strong Justice40 rules and enforcement . Tracking benefits to communities is not enough, we need direct investments and 100% of justice.”

“For Justice40 to be the transformative legacy-establishing program we all wish to see, we need all levels of government fully engaged. We feel our government at the community level, and we are most likely to know who our mayors and city council folks are,” said Maria Lopez-Nunez, Ironbound Community Corporation. “The federal government should be asking states and municipalities directly how they can be a part of the changes Justice40 can bring. Justice40 needs to be the talk around town so that every community member helps us hold agencies, states and municipal governments accountable. This is the way to a real ‘all of government’ approach.”

“President Biden’s Justice40 Initiative is an opportunity to correct the legacy of pollution in Black, Brown, Indigenous, and poor communities in Michigan and around the country. But, the federal government must also ensure that no new harms come our way from projects such as fossil fuel infrastructure, carbon capture technology, hydrogen, and nuclear energy,” said Juan Jhong Chung, Michigan Environmental Justice Coalition. “Those projects are incompatible with the principles of Environmental Justice, and they will not deliver any benefits to our people or the planet. The Justice40 Initiative should not count them as beneficial in any way. Instead, it must prevent and keep track of any harms from false solutions funded in the Infrastructure, Investments and Jobs Act, and the Inflation Reduction Act.”

“California’s legislature recently killed AB 2419, the California Justice40 Act, a bill that would have committed the state to President Biden’s Justice40 Initiative by ensuring targeted investments of federal funds from the Inflation Reduction Act and the Infrastructure Investment and Jobs Act go to frontline and disadvantaged communities,” said Zach Lou, California Green New Deal Coalition. “Without that bill, and with added concerns that the IRA contains elements that will cause harm to those communities, our hope now is for the Biden Administration to keep its word and strengthen rules to its J40 Initiative in order to address those harms while ensuring investments land in the hands of disadvantaged communities.”

“Justice40 is a move in the right direction, an effort that from inception has been touted as a way to bring forth justice and correct the devastating harm that has been inflicted on frontline communities in the name of energy progress for far too long,” said Bineshi Albert, Climate Justice Alliance. “If used correctly, it is a tremendous opportunity for direct investment into frontline, community-led and controlled solutions to the climate crisis, which will actually make a difference. President Biden must ensure that these investments happen to the fullest extent possible. He made this promise and needs to ensure that all federal agencies heed its call.”

“Communities of color were critical to getting President Biden elected. With the Justice40 Initiative, Biden made a commitment to ensure federal investments materially benefit frontline communities, and we are looking to him to deliver on his promise. His administration must not delay any further its final guidance to agencies on Justice40,” said Adrien Salazar of Grassroots Global Justice Alliance. “The initiative has the potential to direct historic levels of critically-needed investments to communities at the frontlines of pollution and the climate crisis who need them the most. The administration should listen to leaders in Congress echoing grassroots demands to implement Justice40 comprehensively, with deep engagement of impacted communities at every level of implementation, and to ensure no federal investments do harm to any communities.”

“President Biden was listening to frontline communities who have long been organizing around targeted investments to impacted communities. Now, as the Administrator is preparing its final guidance on J40 it is critical the White House follow the leadership of frontline organizations and strengthen the initiative by sending funds directly to frontline communities, creating good local jobs, centering justice, and ensuring the guidance is incorporated quickly,” said Ann Clancy of Indivisible. “We thank the Congressional champions who worked to uplift these voices and this fight, and know it is due to the hard work of organizers and communities on the frontlines of the climate crisis that the boldest possible guidance will be won.”

“Members of Congress should be commended for this bold set of recommendations and reform ideas to advance Justice40 and fulfill its promise as a whole-of-government vision of ensuring justice for frontline communities in the climate transition. With the Inflation Reduction Act, there is a mix of positive and harmful investments, which means that fully applying Justice40 is all the more important,” said Lew Daly of the Roosevelt Institute. “Roosevelt Institute is eager to see Justice40 flourish as part of a better climate future, and we are grateful to partner with the United Frontline Table and other grassroots leaders in developing the strongest possible policies and rules toward advancing that goal. It is essential that the Administration follow through in implementing Justice40 by protecting communities from continuing harm and ensuring that federal resources for what they truly need are reaching the most impacted communities.”