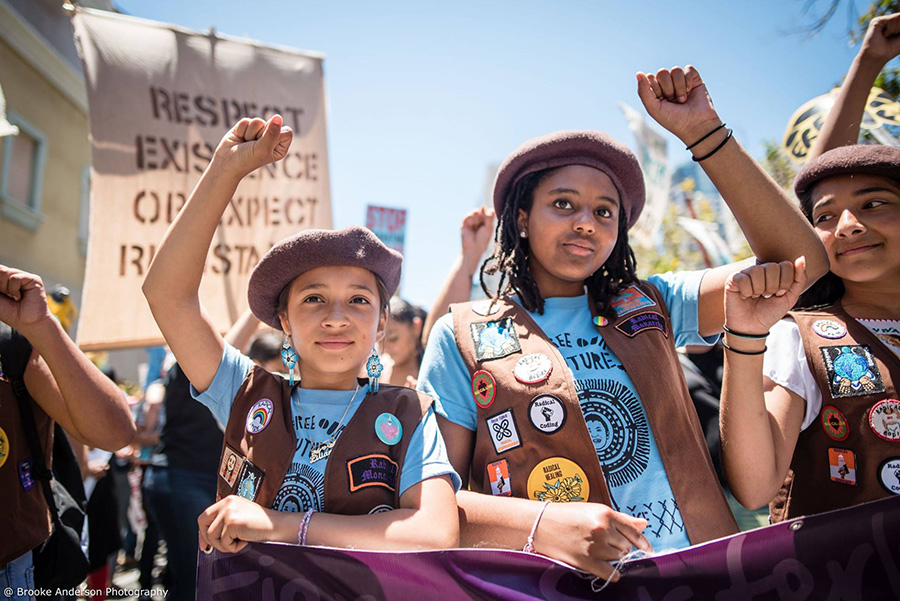 Torn away at the border. Criminalized for being the “other.” Underpaid for labor. In the U.S., immigrants—particularly immigrants from Southeast Asia, Latin America, Africa, and immigrants who practice Islam—are too often seen as less than human. Immigrants have been falsely accused of crimes, causing job losses, and terrorism. Since 2017, over 5,400 children have been separated at the border, while many families are held in detention centers across multiple states. To pursue a Regenerative Economy requires that we uphold the rights of refugees and immigrants as equals in our society.

Reunite children with their families and families in detention centers must be freed. A Green New Deal must divest from, and reject, unjust immigrant detention and family separation. No deal should ever fund the border wall between the U.S. and Mexico.

Divest from Militarism and Imperialism

Refugees and immigrants often flee their home countries due to war, violence, and oppression as a result of U.S. foreign policy. U.S. Department of Defense resources have overwhelmingly gone to support private interests, fossil fuel interests, and other extractive economies. We must divest from militarism and imperialism and reinvest these dollars to support a global and Regenerative Economy that protects immigrants, refugees, and creates stability for communities across the globe.

Guarantee and pay living wages to the many undocumented immigrant workers who grow and harvest our food, do care work, and drive the service, retail, and hospitality economies. As COVID-19 has shown, their work is critical to the economy and daily modern life. All work and workers, regardless of immigration status, must be respected and dignified through livable wages; safe working environments; fair treatment, free of harassment and threats; and workers’ rights protected by law.

Immigrants have been discriminated against, denied access to care, and denied entry to schools. In particular, undocumented trans, queer, and gender non-conforming immigrants have felt the deep burdens of marginalization and isolation in unjust immigration policies and services. Policies must create equitable and caring pathways for members of this community.

A Regenerative Economy values the lives and dignity of all people and workers. We cannot achieve our vision if millions of immigrants are forced into the shadows. We must create an inclusive society that grants protections and asylum to all immigrants, treated equally, and granted full participation in democracy.