DIVEST FROM WARS, CRIMINALIZATION & MILITARISM AT HOME AND ABROAD —- INVEST IN A REGENERATIVE FUTURE 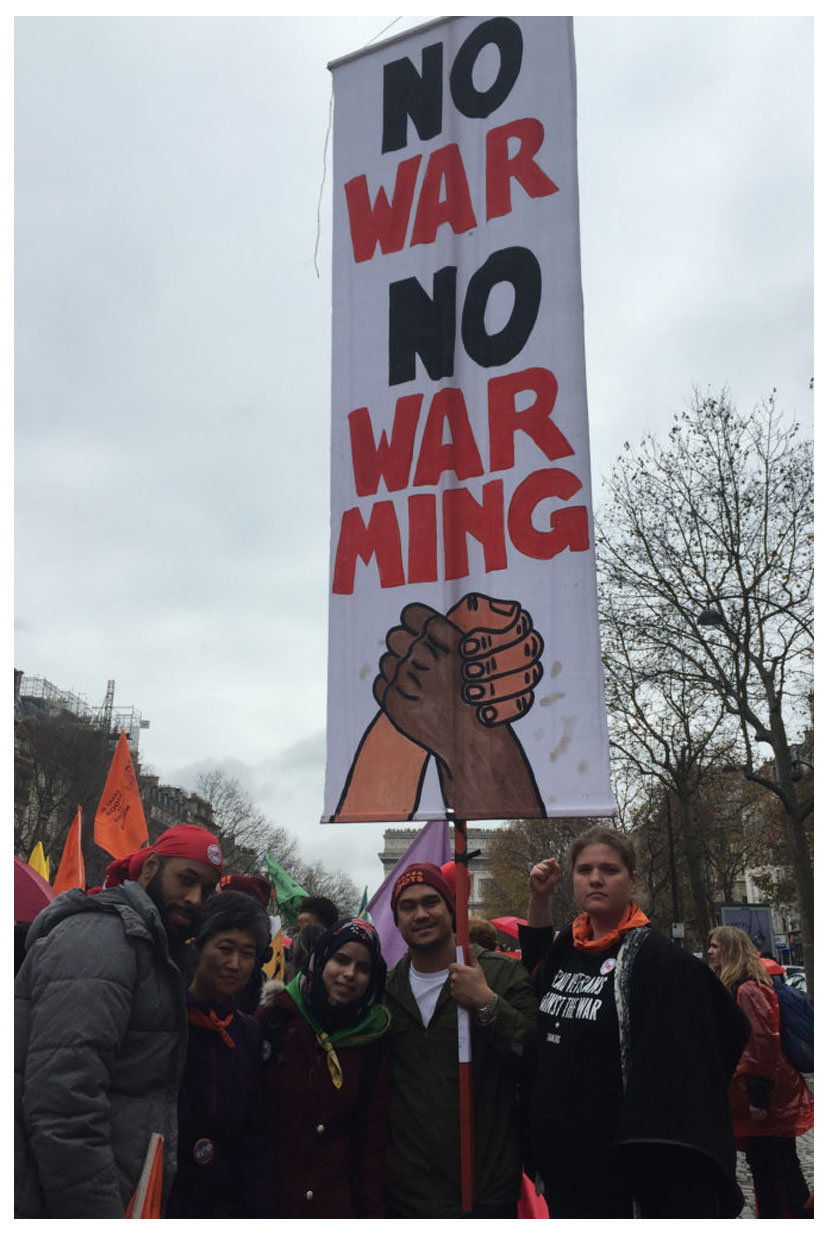 Communities across the U.S. and across the world have been devastated by military occupation, war, and state-sanctioned violence. The U.S. military is also the single largest consumer of fossil fuels in the world, and has served as the enforcer of occupation of Indigenous and sovereign lands while upholding violent resource extraction across the world. Addressing climate change requires ending the military industrial complex. At the same time, increasingly militarized police forces perpetrate harm in Black, Indigenous, Latinx, Asian, Arab, Pacific Islander communities, poor, and marginalized people, and violence against women, femmes and gender non-conforming peoples, while the carceral system/prison-industrial complex destroys our communities and families.

A Just Transition to a Regenerative Economy must end wars, military culture, and the violence of militarized forces and police in our communities and across the world. We must transition from economies of war and violence that perpetrate systems of oppression, towards regenerative economies of life. A Just Transition means investing in alternatives to policing and military intervention that advance accountability, healing, and transformative justice, including for those in the military and police, while upholding community self-determination and sovereignty.

Protect the sovereignty of lands, waters, natural resources, cultural and historical artifacts, and sacred sites and prevent the extraction and exploitation of resources by militarized forces by enshrining and enforcing the Rights of Nature; preventing land, air, and water defenders from criminalization; and enforcement of UN Resolution 2347, relating to the protection of cultural heritage.

Divest from and dismantle state surveillance and technology, declassify counter-intelligence and infiltration, and end the criminalization of National Security Administration and Department of Defense whistleblowers and those who want to leave the military, including translators.

Protect communities’ and nations’ rights to self-determination within the U.S. and abroad by demilitarizing local police forces, reducing police force presence in communities, withdrawing military personnel from occupied communities and the southern border, ending U.S. military aid to foreign governments, shutting down the School of the Americas (SOA/WHINSEC) and ending U.S. foreign military training, and extending asylum and protections for refugees and people impacted by war and militarization.

Defund police, prisons, ICE, the military, and other militarized regimes that propagate harm including stopping transfer of military-grade equipment to police forces; close youth prisons; abolish prison labor exploitation including amending the U.S. constitution to strike slavery and involuntary servitude as punishment for a crime; release all prisoners including prisoners of war and political prisoners; and invest in alternative community solutions, for example, divestment strategies outlined in the Breathe Act.

Clean Up, Remediate, and Transition Military Bases and Militarized Communities

As the U.S. military remains the single largest consumer of fossil fuels on the planet, ending the fossil fuel economy and building a regenerative economy will require shutting down fossil-fueled military bases and operations, and withdrawing military installations outside the U.S. and on occupied territories (such as bases in Hawaii, Guam, Cuba, Puerto Rico, and the Philippines– a network of roughly 1000 bases around the world), and ensuring toxic remediation and a Just Transition of base sites to alternative healthy and resilient community uses. It will also require rejecting the development and testing of new nuclear weapons that have historically been tested in indigenous land and communities of color in the U.S. and abroad.

As we divest from the institutions that cause harm, we must invest in alternative forms of support and accountability for our communities that enhance community self-determination, including non-police, non-military community care and self-defense. This also includes investing in mental health care, universal healthcare, high quality education, safe water, fresh accessible foods, and a healthy environment. This also includes transitioning to a reparative model of U.S. foreign policy that provides redress for wrongdoing and takes responsibility for the role that it has played historically in destabilizing and displacing communities worldwide.

Education in the True History of War, Settler Colonialism, Imperialism, White Supremacy, Its Continuing Impacts on Communities, and Legacies of Resistance

Invest in education such as integration of ethnic studies in standard curricula, making the impacts and legacy of militarism around the world visible, as a way to end the fetishization of war, military, and police culture.

(Resource:  this paper seeks to update the curriculum and education system to not train kids to participate in the growth / capitalist economy but train them to rebuild the ecosystem  https://muse.jhu.edu/article/619874)

Healing From Trauma and War

Invest in reparations for survivors of police violence (link to plank 2) and for communities abroad impacted by U.S. intervention and militarism, as well as transition support for people in the military and police. In order to heal from the violence of militarism, we must invest in support for survivors of war and gender-based violence fueled by war and occupation, including in refugee services and reparations for war sex-traffic survivors. Transitioning from these systems of harm also includes investing in accountability, healing, education, and retraining for people in the military/police, and veterans towards regenerative livelihoods.

Create policy bans on weapon manufacturing, end the production of nuclear weapons, and repurpose military equipment and weapons manufacturing facilities for regenerative livelihoods. Negotiate treaties to ban the trade, trafficking, and distribution of weapons of war.

U.S. Relationship to Other Nations from One of Imperialist Usurpation to One of Cooperation and Accountability — End Sanctions, Wars, and U.S.-Funded Occupations

Cut government contracts with former war officials and U.S.-based corporations responsible for past harms; and bar executives of war profiteers from being appointed to government agencies.